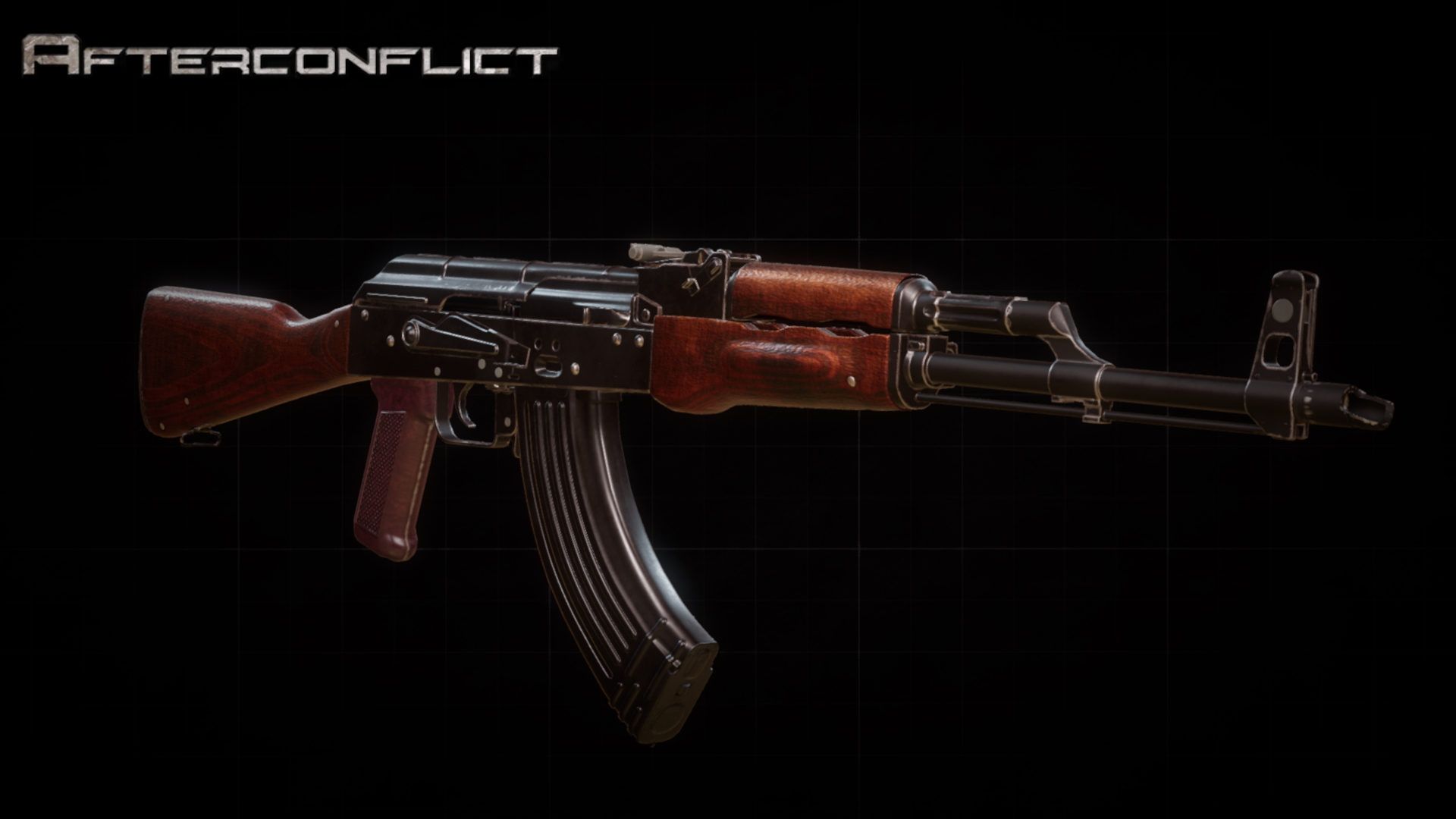 Though the AK was a historic first design of what would quickly become one of the world's most recognisable series of rifles, it still had various elements that could be improved, most of all on a production front that would assist in the ability to quickly and comfortably equip entire armies not only domestically- but internationally for those fighting for the "right" causes.

Principle among these production changes was a transition from a milled steel reciever to a stamped one of thinner guage steel that resulted in a lighter rifle (by approximately 1kg) retaining all of the structural integrity of the AK due to added reinforcements, while being easier to manufacture.

While there were many other minor production changes from the AK to the AKM, the ones most commonly noticed are the newly ribbed dust cover, different style of now laminated pine (adopted from the Type 3 AK) furniture, and most being fitted with a slant-cut compensator (though this was attached when being placed into service, not out of the factory). 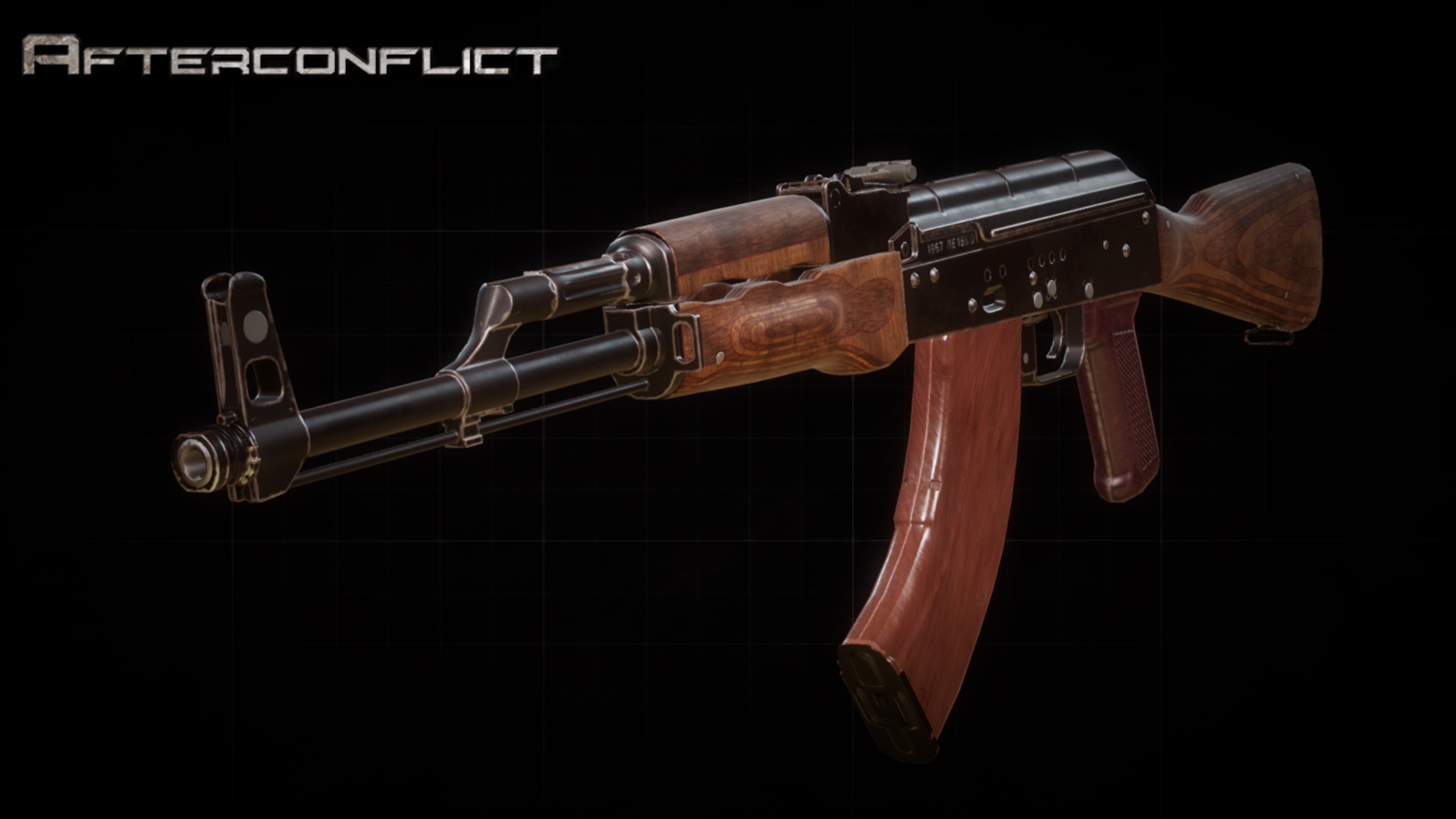 While a ribbed dust cover and the particular type of wood used for the furniture of the AKM won't assist you much in gameplay terms while playing Afterconflict, the difference between using the straight-from-the-factory muzzle nut and attaching the slant-cut compensator is a difference that can be felt while firing the AKM in-game, reducing recoil especially with automatic fire.

On the topic of being straight-from-the-factory, there are many misconceptions about the AKM's variants such as the AKMS, AKMN, and AKML- that they're created simply by attaching a folding stock or an optics rail to an ordinary AKM which is not the case; let's go into each of those variants and their differences. 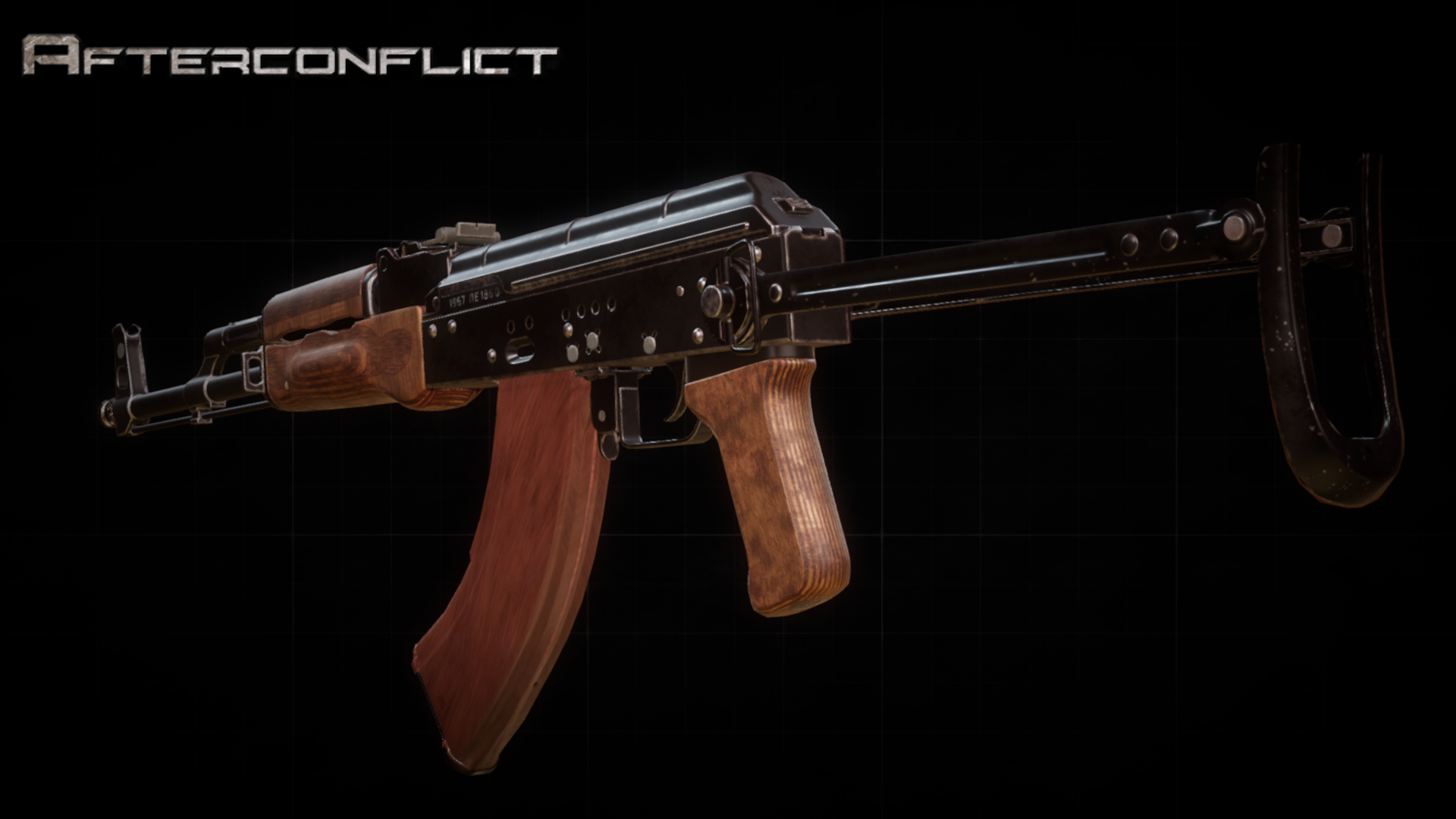 The AKMS's role, as with the AKS, was largely intended for paratroops who required a more compact assault rifle that could be quickly and easily carried and deployed during a combat drop; however in light of the APS's production costs and overall lack of firepower it also found use among vehicle crews.

In terms of the production differences beyond the different stock design, the AKMS has a different rear trunion to facilitate the attachment of said stock, differing rivet positions on the reciever, and the pistol grip always being of the wooden type due to the ordinary "bakelite" (we'll get into that name later) pistol grip often cracking under the conditions faced during the average parachute drop.

When playing Afterconflict folding stock weapons such as the AKMS will no doubt be useful for close encounters when moving in confined spaces as longer weapons are liable to get caught on door frames, windows, etc.
Who knows, you may even be able to use the AKMS in a combat drop down the road... 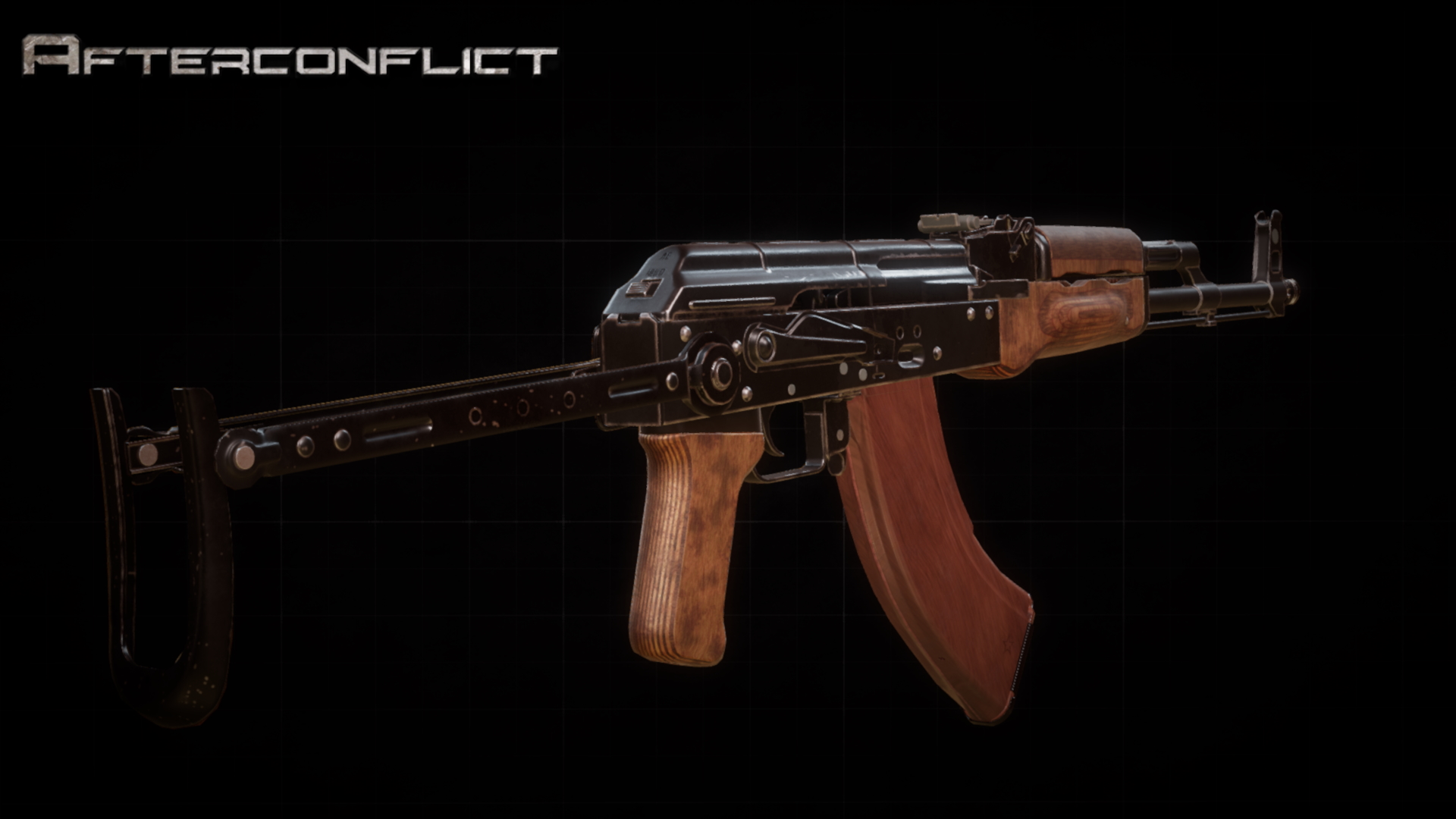 On to the railed AK variants there is the AKMN and AKML, both of these variants' main objective is to have the ability to mount night vision optics and were factory-fitted with rails to achieve this, however both were often repurposed as marksman rifles by mounting regular optics, particularly during the Soviet-Afghan war.

Of the two types the AKML is largely viewed as superior due to its ability to mount the PSO-1 scope (which the AKMN was explicitly designed not to do), a more favourable mounting position for daylight optics in general, and that it is supplied with a flash suppressor (something useful for both not blowing out your night vision optics or your position at night, good for the more subtle player). 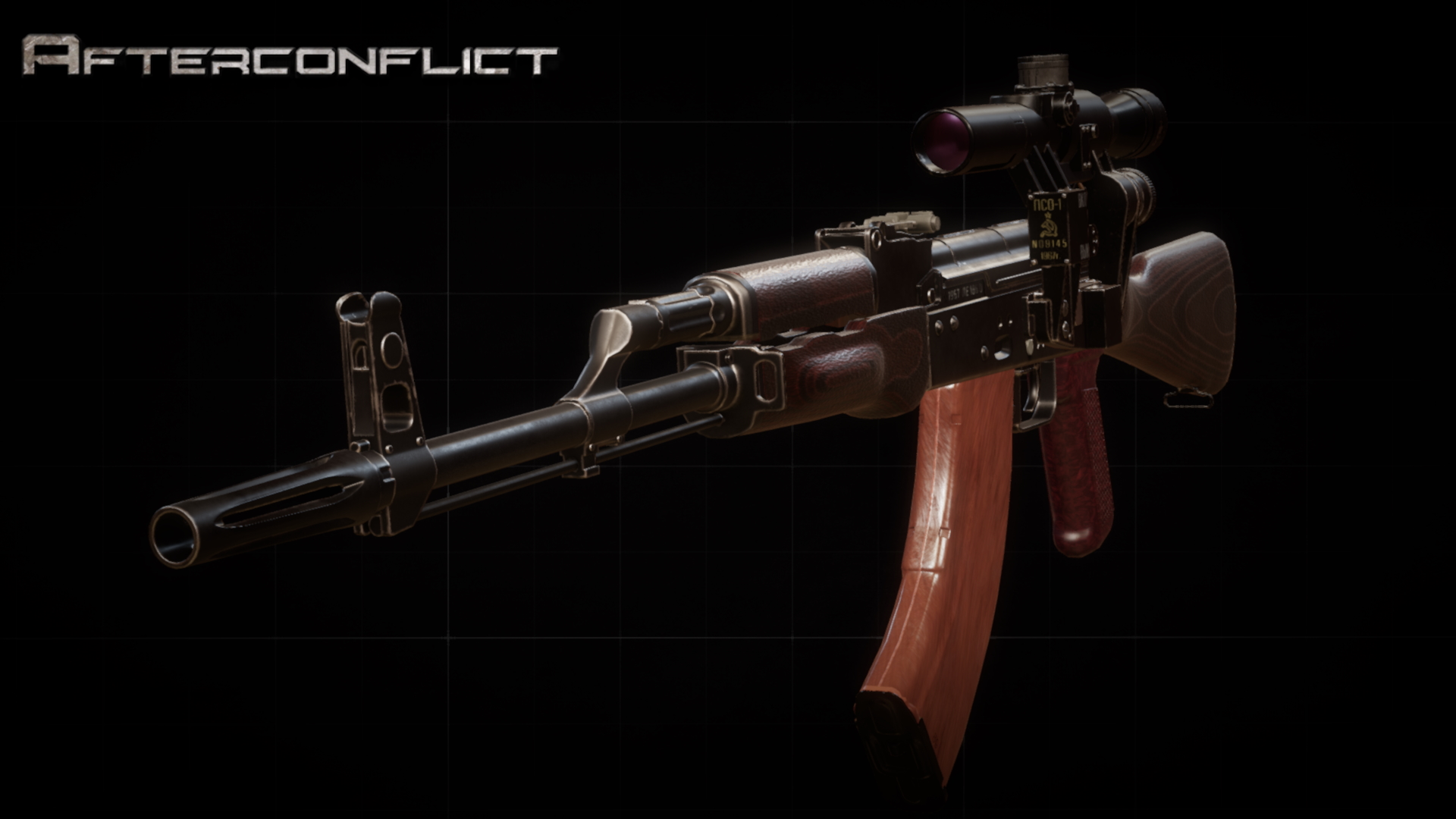 However, though the AKML was ultimately the more favourable of the two, it was produced in smaller numbers than the AKMN, which when you take into account that out of every 100 AKMs produced only 1 of them would be an AKMN, isn't exactly favourable for those that enjoy using optics.

If you wish to use the AKMN or AKML in-game, you'd better to be ready to sacrifice in other equipment departments to afford its points cost, and perhaps it'd be worth just using a PGO-7 scope on an AKMN rather than forking out even more points for an AKML with a PSO-1, the choice is yours. 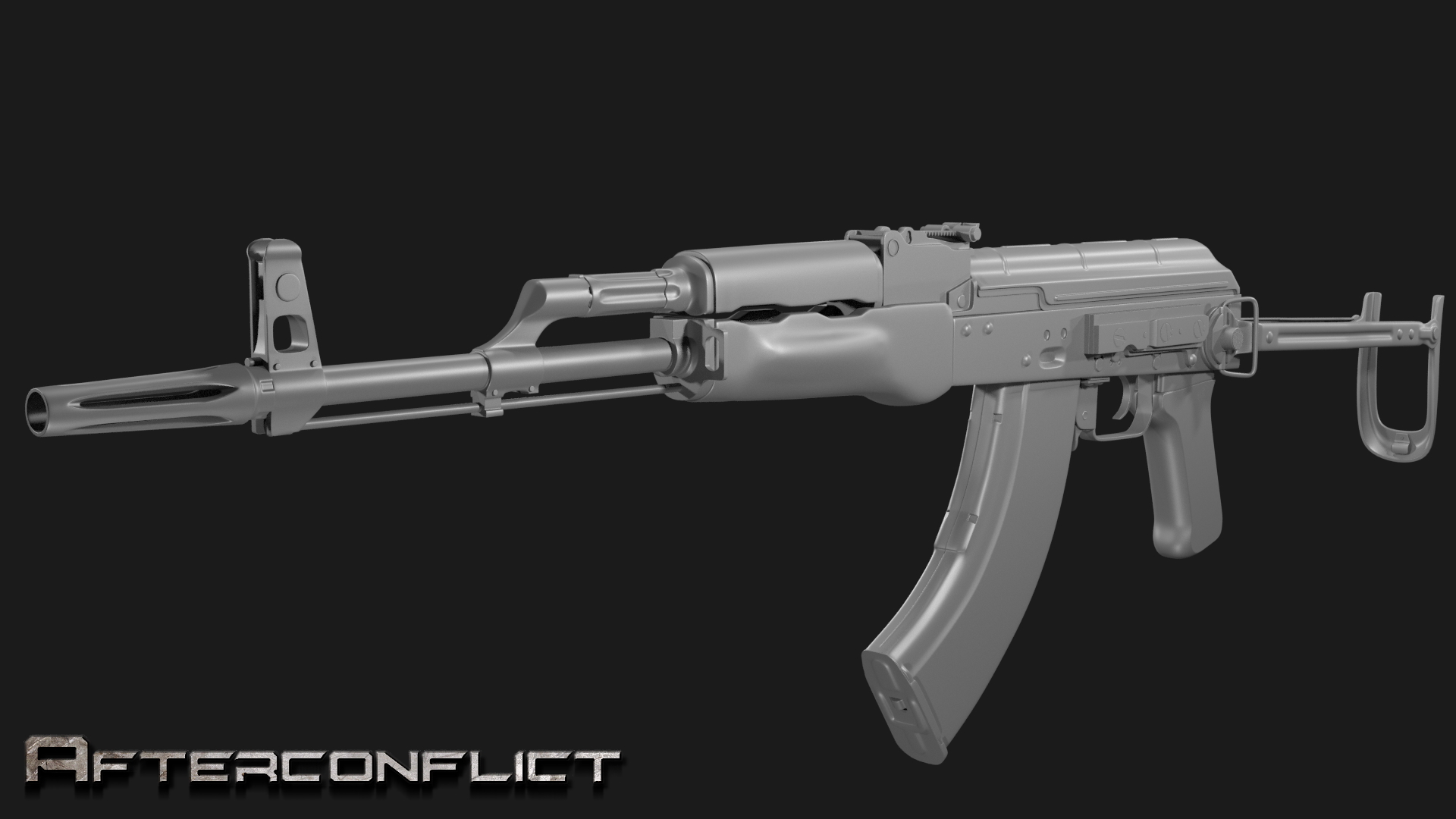 Although so far we've had the AKMS, AKMN, AKML, and everything inbetween which are all factory-fitted with their additional components, the AKMP is a variant that virtually any AKM can be converted to.

The AKMP is an AKM with the addition of a set of 6Ч3 tritium ironsights, a cheap and economical way of equipping an ordinary soldier with the ability to accurately fire at night with the help of tracer ammunition, instead of having to rely on AKMNs and AKMLs with large, bulky night optics. 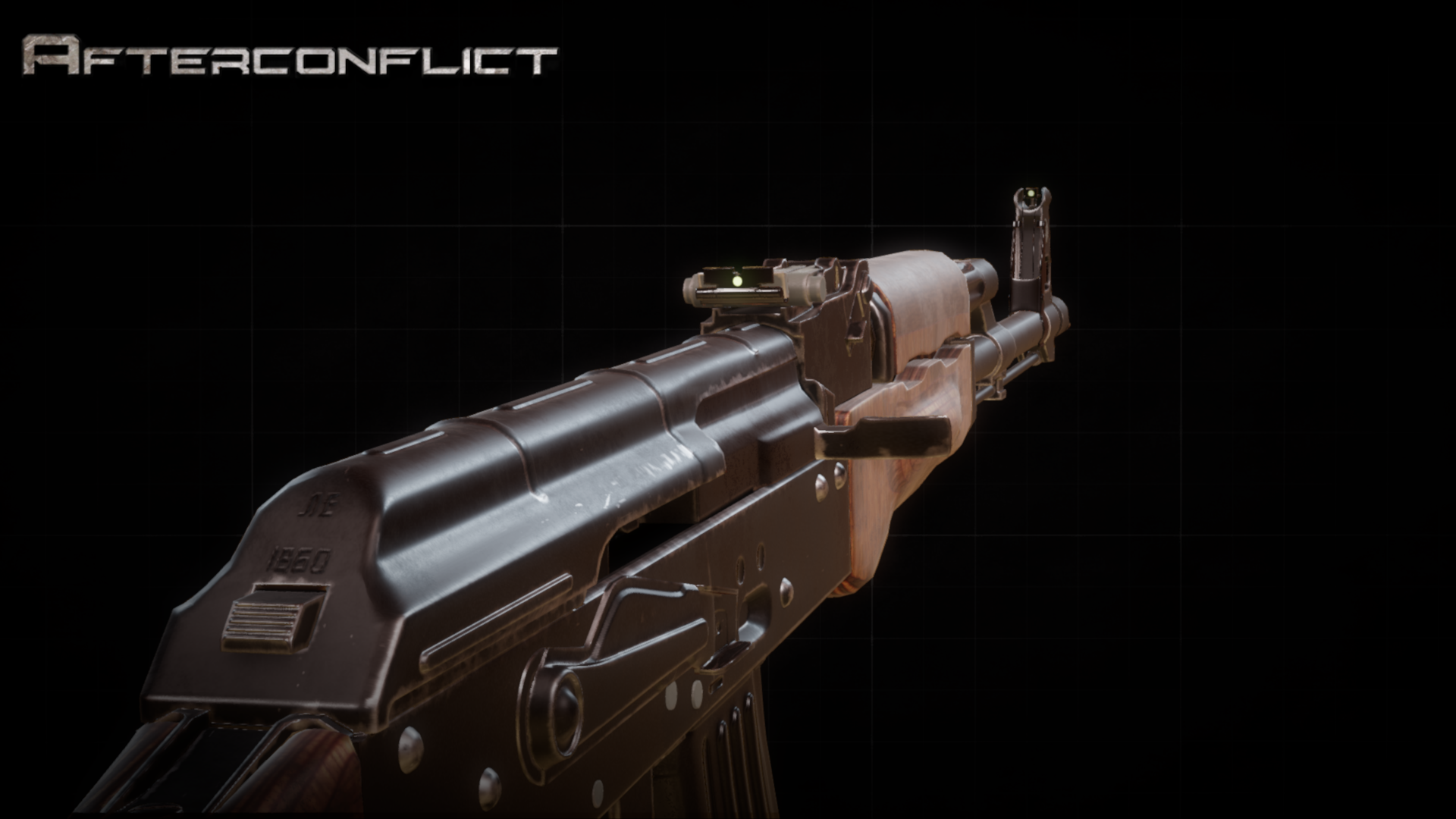 This same logic applies in Afterconflict, instead of trying to equip everyone in a squad with an AKML and their preferred flavour of night optic while being lacking in most other equipment departments, you could instead appoint a member of your team to serve as spotter with a night vision optic and coordinate to effectively engage targets while using a wider range of equipment.

Amusingly, the AKMP being considered its own variation can result in the creation of the AKMSLP, no doubt the cause of annoyance of some Soviet armourers.

An addition to the AKM that warrants its own designation as the "AKMB" is the PBS-1 suppressor and its set of ironsights that are set for the usage of said suppressor and the 7.62x39 "US" cartridge. 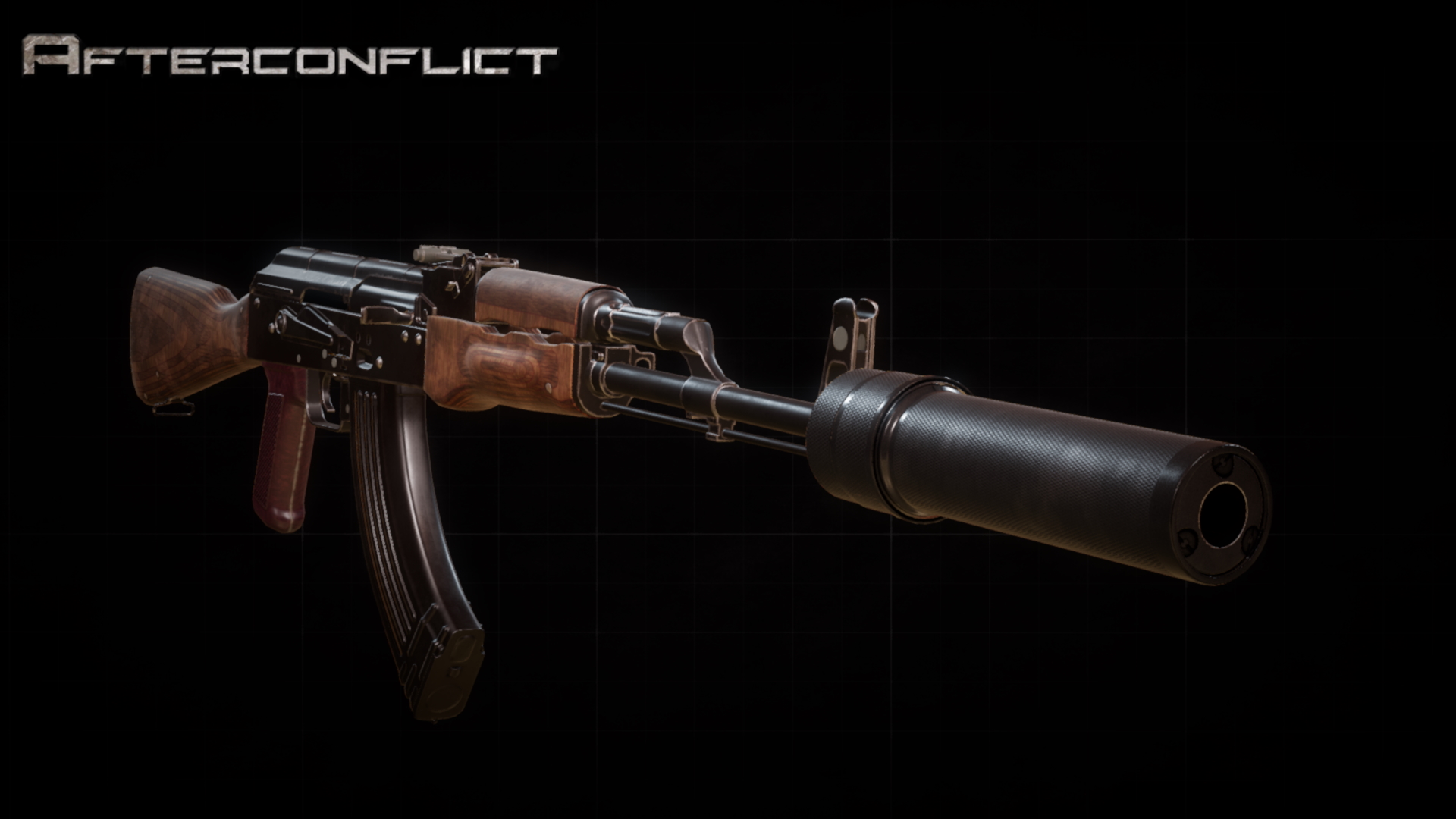 The PBS-1 was one of the more specialised AKM accessories, primarily being used by Soviet forces that were required to do their work with discretion (although not quite the level of discretion the PSS pistol was designed for later on), resulting in them generally only being issued to some of the Soviet Union's most elite troops.

Although the AK-74 had been in service for several years before the Soviet-Afghan war, the AKM still found near constant service with Spetsnaz units, largely due to the fact that while the 5.45x39 calibre does not have the ability to be effectively fired through the AK-74 with a suppressor, the AKMB remained perfectly adequate in the role it was required for.

If you're a player that prefers to remain unseen and unheard, perhaps the AKMB will be a perfect match for your playstyle.
Also, remember to fill your magazines with 7.62x39 US as accidentally firing with a magazine full of tracers likely won't do you much help for maintaining a low profile...

Many in the west regard shooting with the PBS-1 sights, 6Ч3 sights, and AK-style sights in general to be difficult and overall inferior to the more open sights of rifles such as the M16A2, however this is largely due to a critical lack of understanding in how AK sights function.

When set to the battle zero sights setting (П), all the shooter needs to do is place the AK's sights at the bottom of the target, this will near always guarantee a solid shot on the centre of the target at normal engagement distances, which with the AKM firing a 7.62x39 bullet, should be enough to immobilize an enemy combatant.
Try this method out in the in-game firing range and you'll see this method's effectiveness! 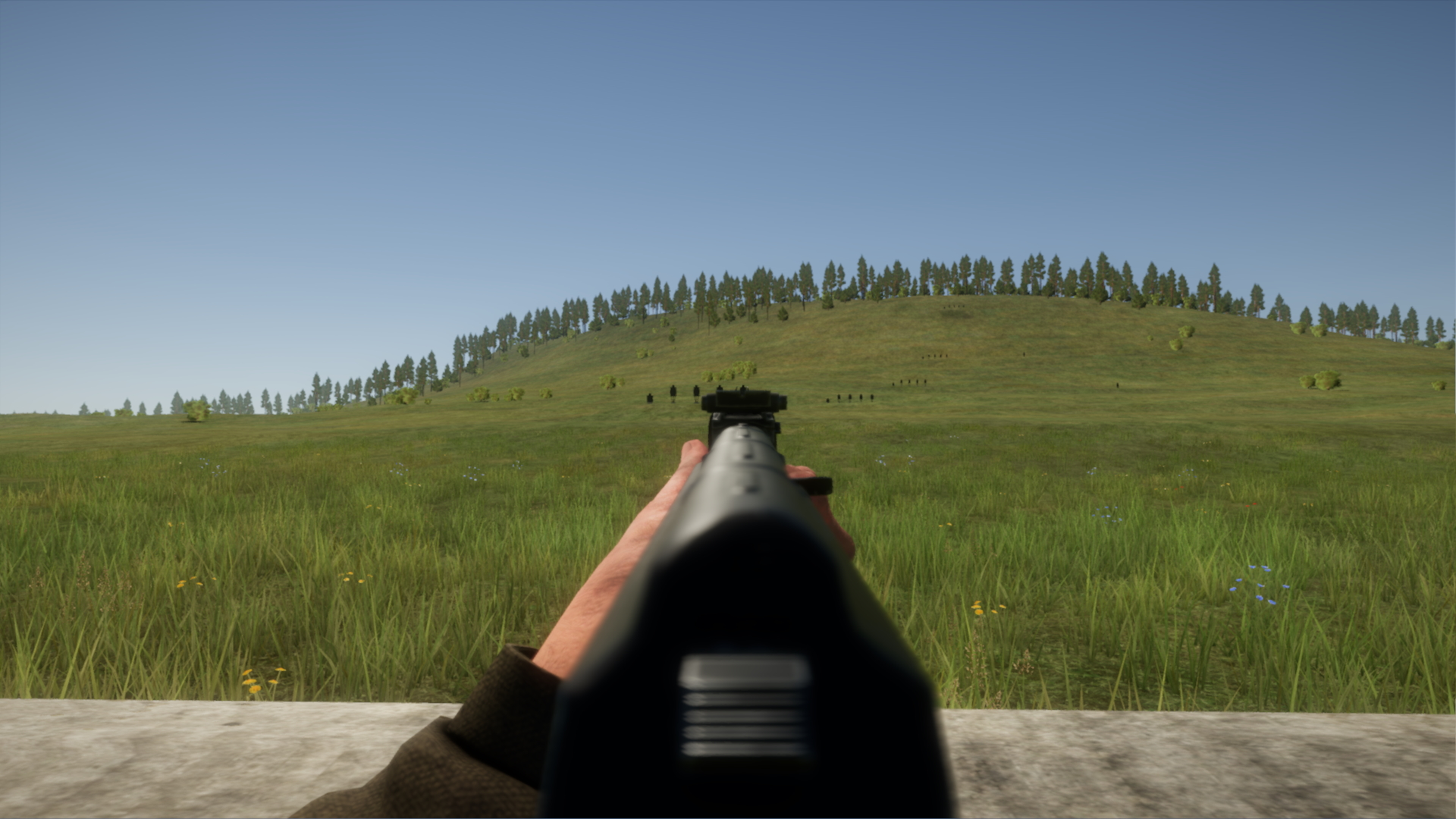 We make no compromises on realism when people who don't know how certain weapons work complain that they can't use them effectively, meaning we won't do anything like artificially widening the AKM or any other weapons' sights for "ease of use".
As we established, us saying Afterconflict will have accuracy and realism isn't a marketing ploy, it's a promise.

When many people picture the AKM it's usually pictured with a steel magazine, and while that would be correct throughout most of the 1960s, in 1968 a "bakelite" magazine was introduced as both a measure to make production more efficient along while further reducing the AKM's overall weight.

These new magazines would end up accounting for at least 50% of all AKM magazines, and would be the foundation for the distinctive 5.45x39 magazines of the AK-74; you'll be able to choose between either of them while playing Afterconflict. 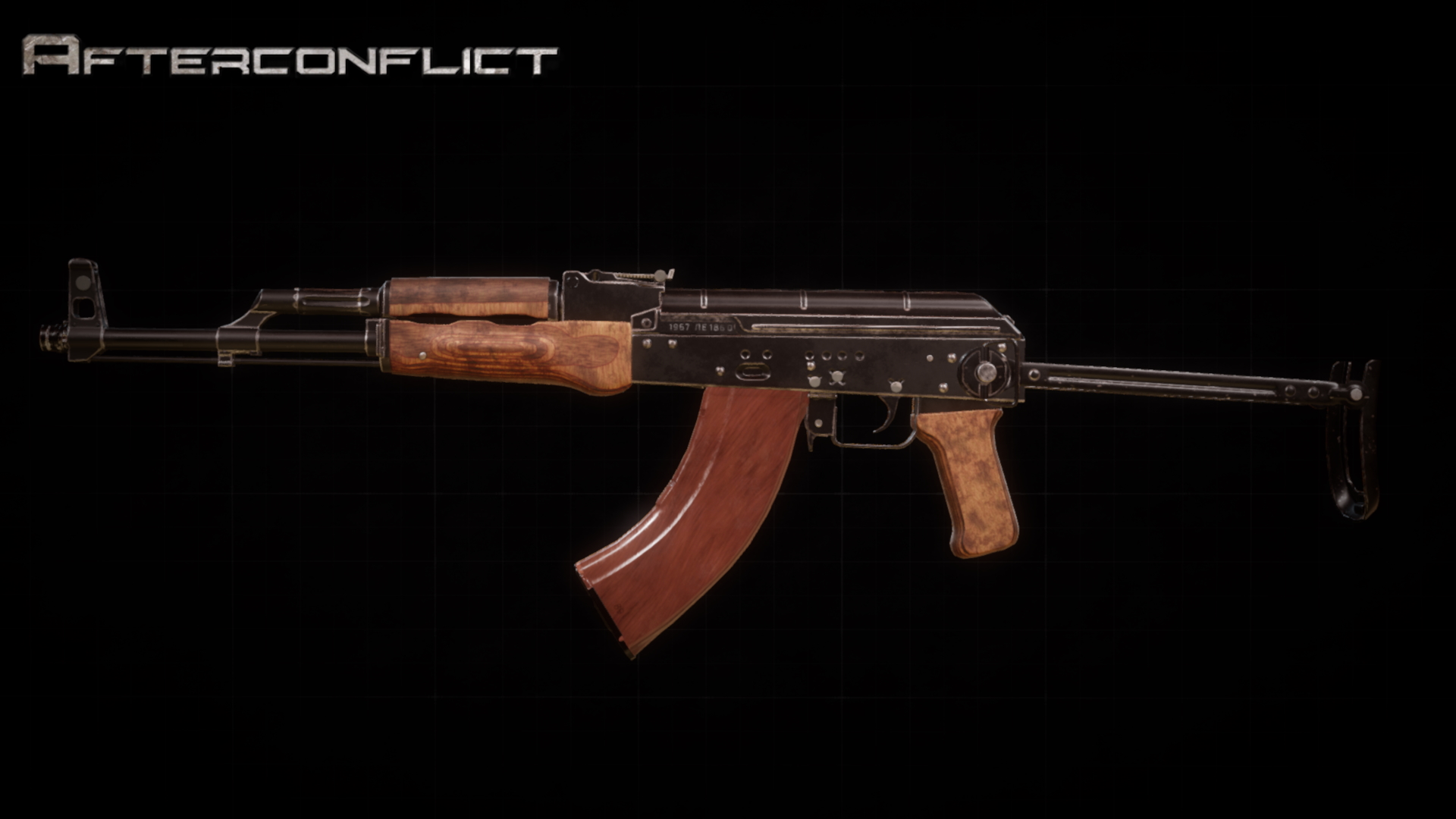 In addition to the standard 30-round magazines, the AKM has the ability to fit 40-round 7.62x39 magazines taken from the RPK, a particularly popular method used in Afghanistan.
However, while the "bakelite" 30-round AKM magazines account for nearly half of the AKM's standard magazines, "bakelite" 40-round RPK magazines were a lot less common, using them in-game is definitely more of a style-over-substance sort of choice.

I've placed the word "bakelite" in quotes multiple times throughout this article, and while "bakelite" is the common name for most plastic features on pre-90s Soviet weapons, said "bakelite" isn't bakelite at all, it's actually called AG-4, of-which had many minor variations for different pieces, such as the difference between the AG-4 of a PM's grip and that of a 7.62x39 magazine.

Finally on the customisation front there are the choices between the AKM's furniture and pistol grip.
While the AK's birch wood furniture left a lot to be desired, the Type 3 AK and subsequently the AKM's laminated pine wood furniture was of a high quality and able to be easily produced in large quantities by Soviet manufacturers, making both the manufacturing of new AKMs and replacements of rarely broken stocks and other such components an exceptionally easy task. 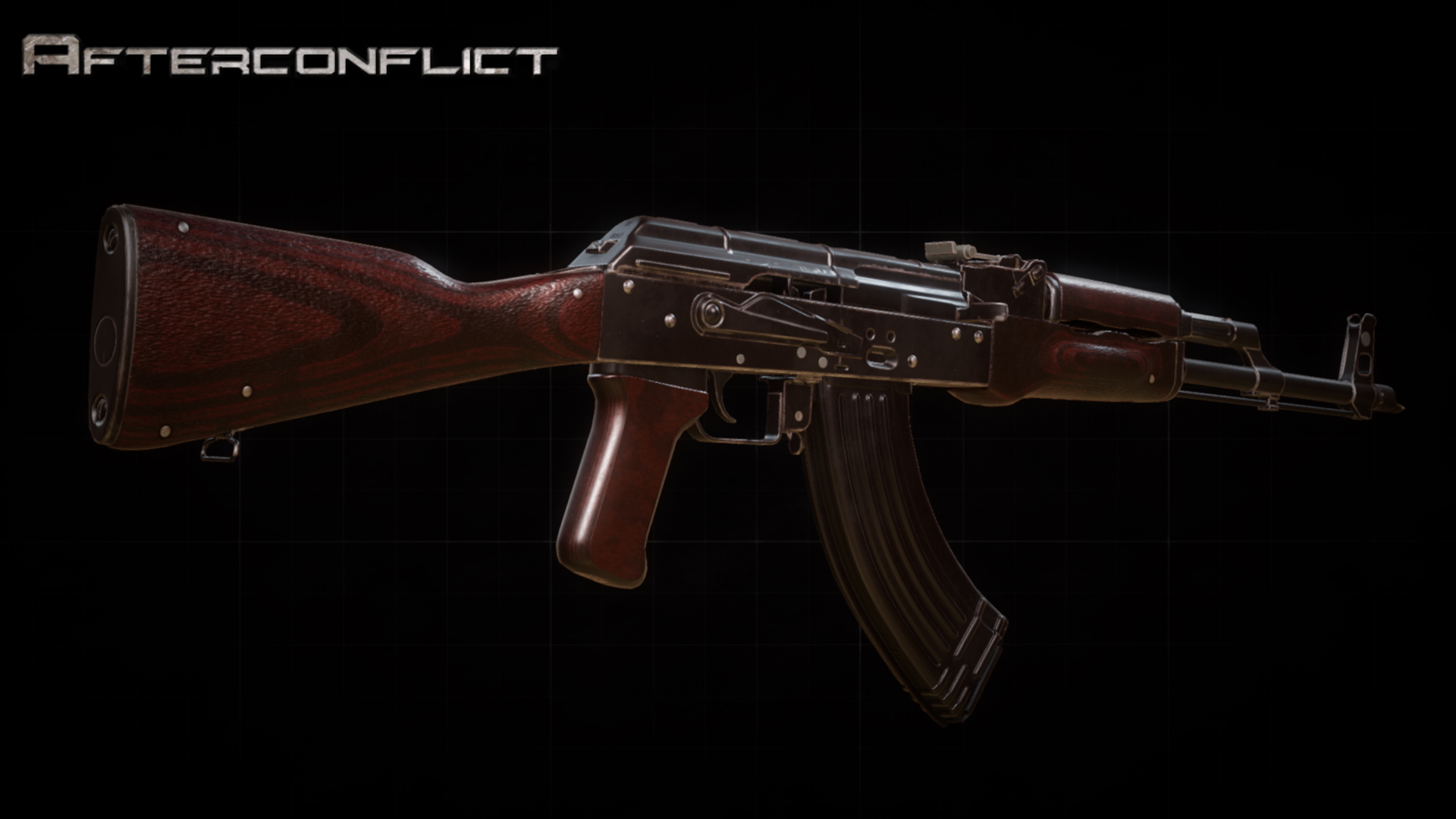 Though the base AKM's laminated pine wood was virtually always the same, some difference did come in the way of differing finishes, some lighter and darker than others- which along with more heavily used furniture that has had a lot of the finish worn off, will be able to be selected by the player while playing Afterconflict.

There will likely be even more choices added in the future too. 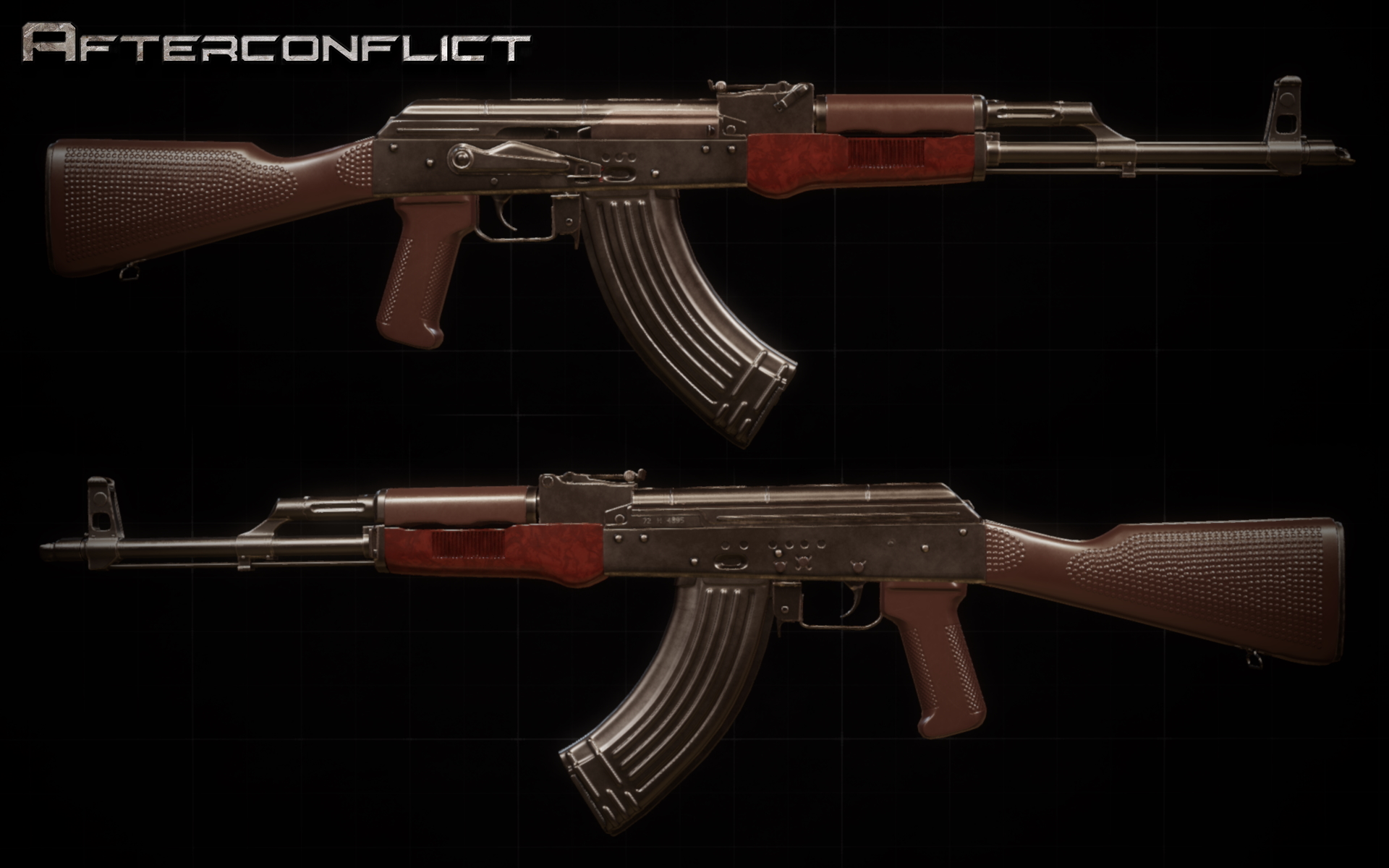 In addition to the Soviet production of the AKM, most Pact-alligned countries had their own domestically produced version of the AKM under licence, of these one of the most notable (and most numerous) is the DDR's MPi-KM, which you can see in-game here.

We'll likely have an Afterconflict Armoury article on DDR weapons in the future, so stay tuned for that!
Other international AKM variants include the Romanian PM md. 63, the Egyptian MISR, and the North Korean Type 68. You may even see some of those in Afterconflict too. 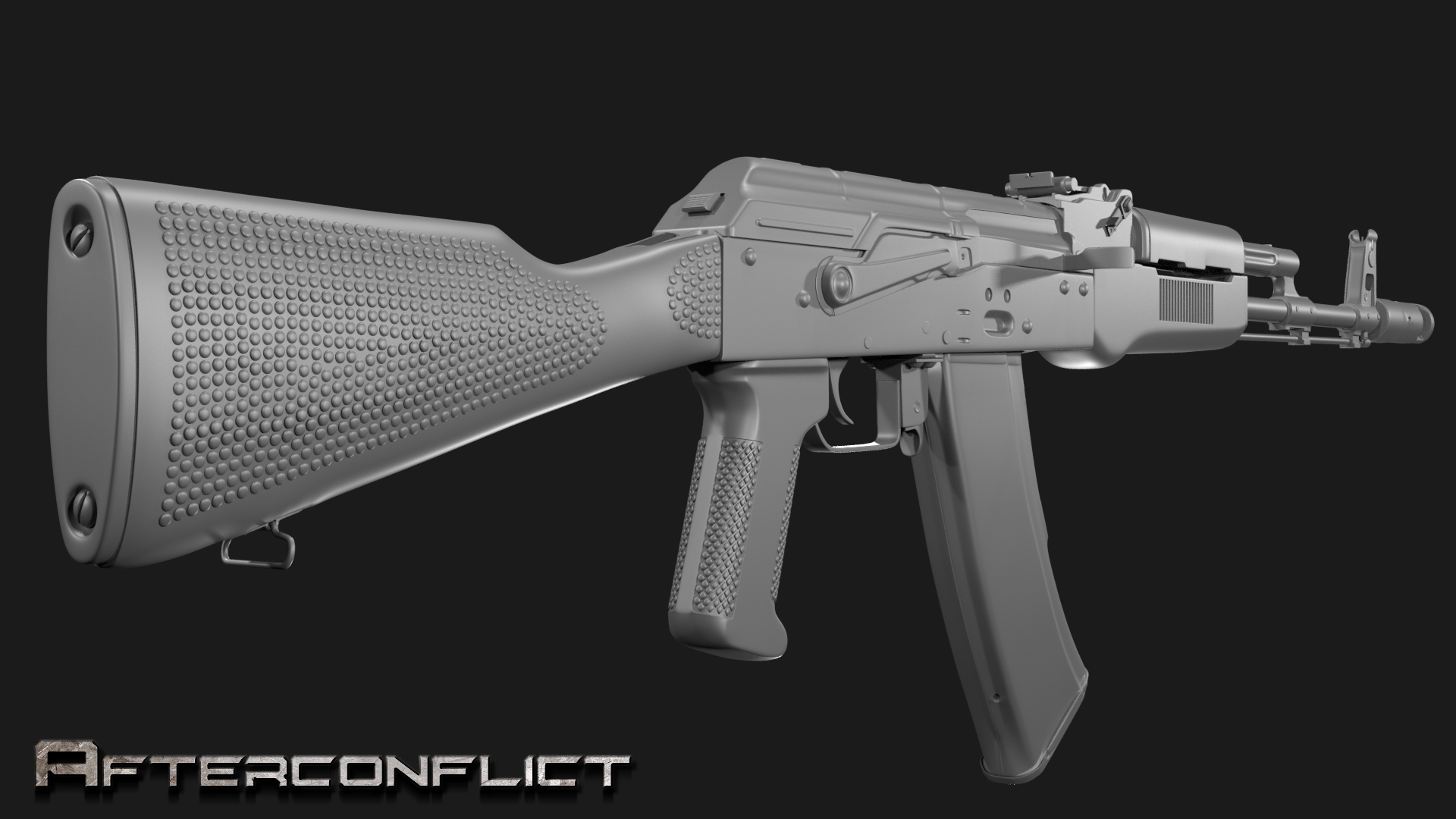 Overall, the AKM is a rifle that needs near no explanation in itself, it's a tried and tested weapon that at over 10,000,000 units produced is one of the most recognisable guns in the world (albeit often listed as the "AK-47" on the news), though with this article we hope to have cleared up a lot of the common misconceptions about the AKM itself and we hope you've enjoyed reading it!

Those with modern tastes in Soviet rifle technology will most certainly enjoy what we have in store next, which we've already been previewing, so keep an eye on our Twitter and Discord for all of our latest previews and updates.

We hope you enjoyed the latest installment in this ongoing series, and we'd love to hear your thoughts and if you've learnt anything new!
If you'd like to talk to others about this article or anything similar in general, the Afterconflict Discord server has been continuing to grow recently and we'd love to have you as part of our community, we discuss all sorts of things from general gaming to sharing different pieces of history from the cold war.