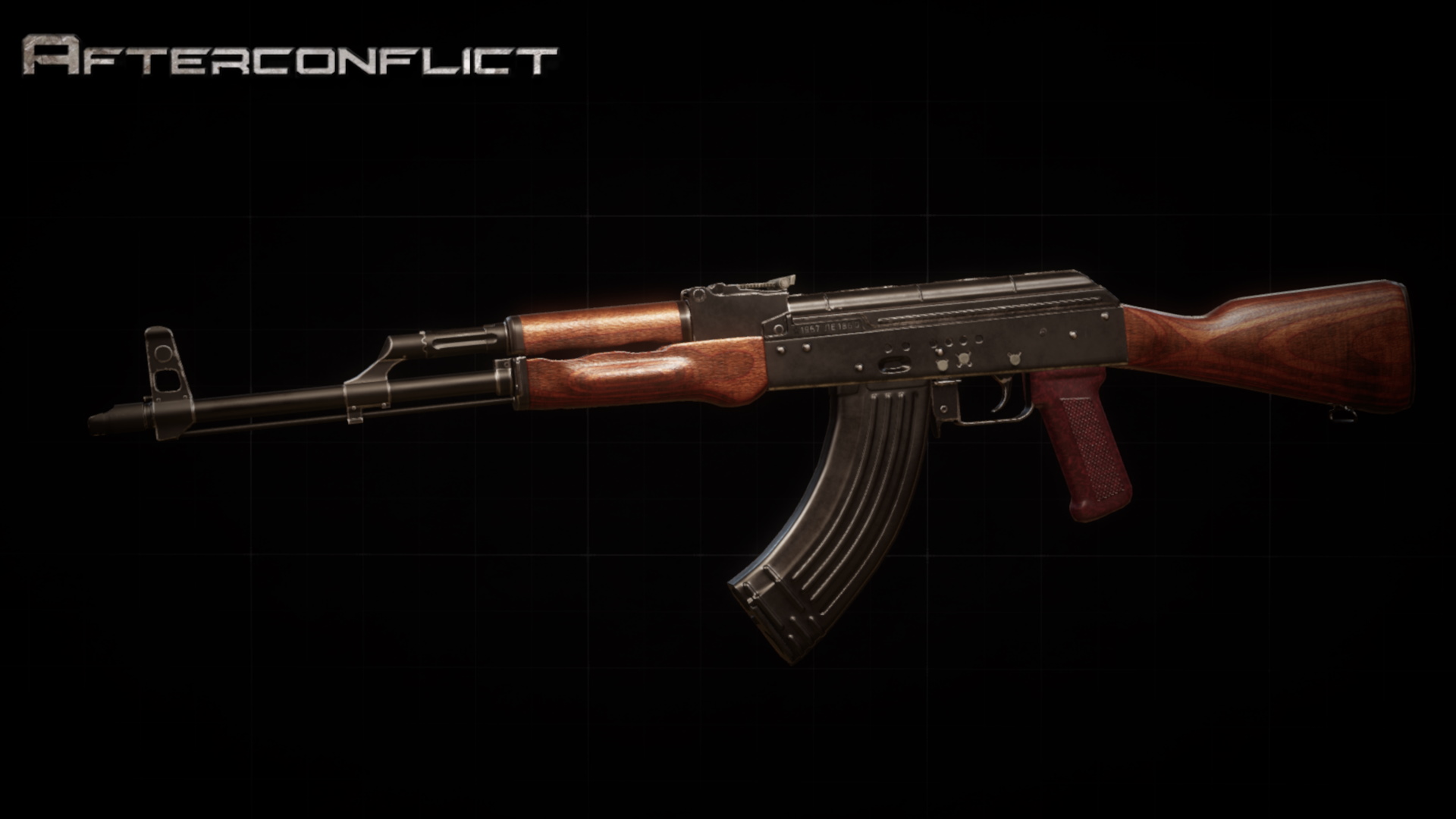 We mentioned we'd be showing more of the AKM and its attachments in this update, and that's exactly what we're going to do.
While the AK-74 became standard issue for the Soviet Army in the late 70s, the AKM still remained in service with Soviet troops long after it had been "officially" replaced, largely due to its versatility.

One of these points of versatility is that while during the Soviet-Afghan War the standard AK-74 rifle didn't possess a viable method of being suppressed with its 5.45x39mm calibre, the 7.62x39mm AKM had the tried-and-tested PBS-1 suppressor and sub-sonic "УС" cartridge at its disposal which made it a continued favourite of Soviet special forces during the war.
In addition to the PBS-1 being in Afterconflict we'll also be adding the ability to mount the PBS-1's replacement rear-sights, so keep an eye out for that in the future. 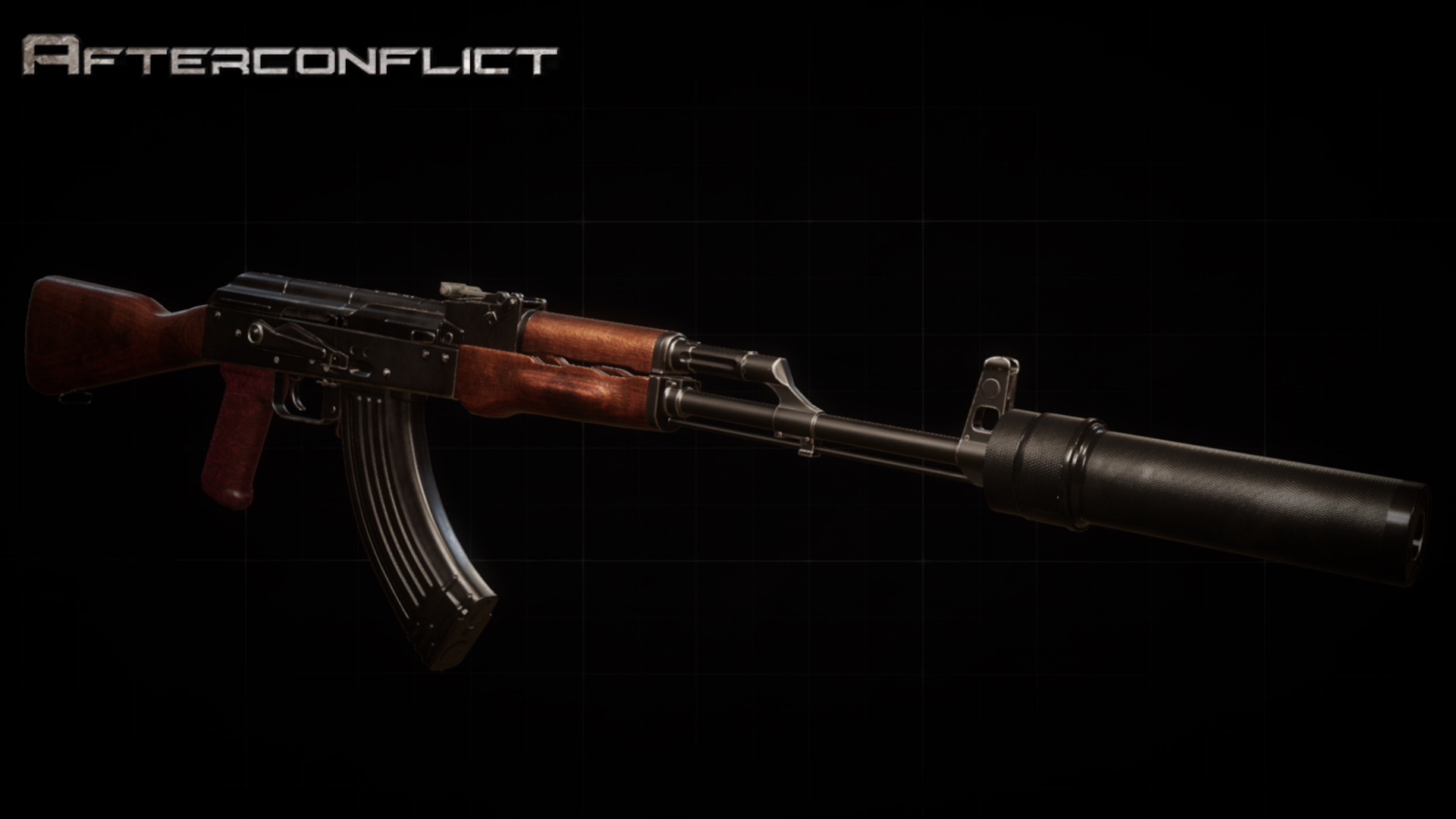 Another point of versatility of the AKM during the conflict in Afghanistan is that while not only was the AKM's 7.62x39mm calibre better for use at Afghanistan's long engagement distances than the AK-74's 5.45x39mm, but the limited numbers of AK-74N's were able to be supplmented by AKMN's and AKML's- with the ability to mount and efficiently use scopes such as the PU-1, all of-which you'll be able to use in-game. 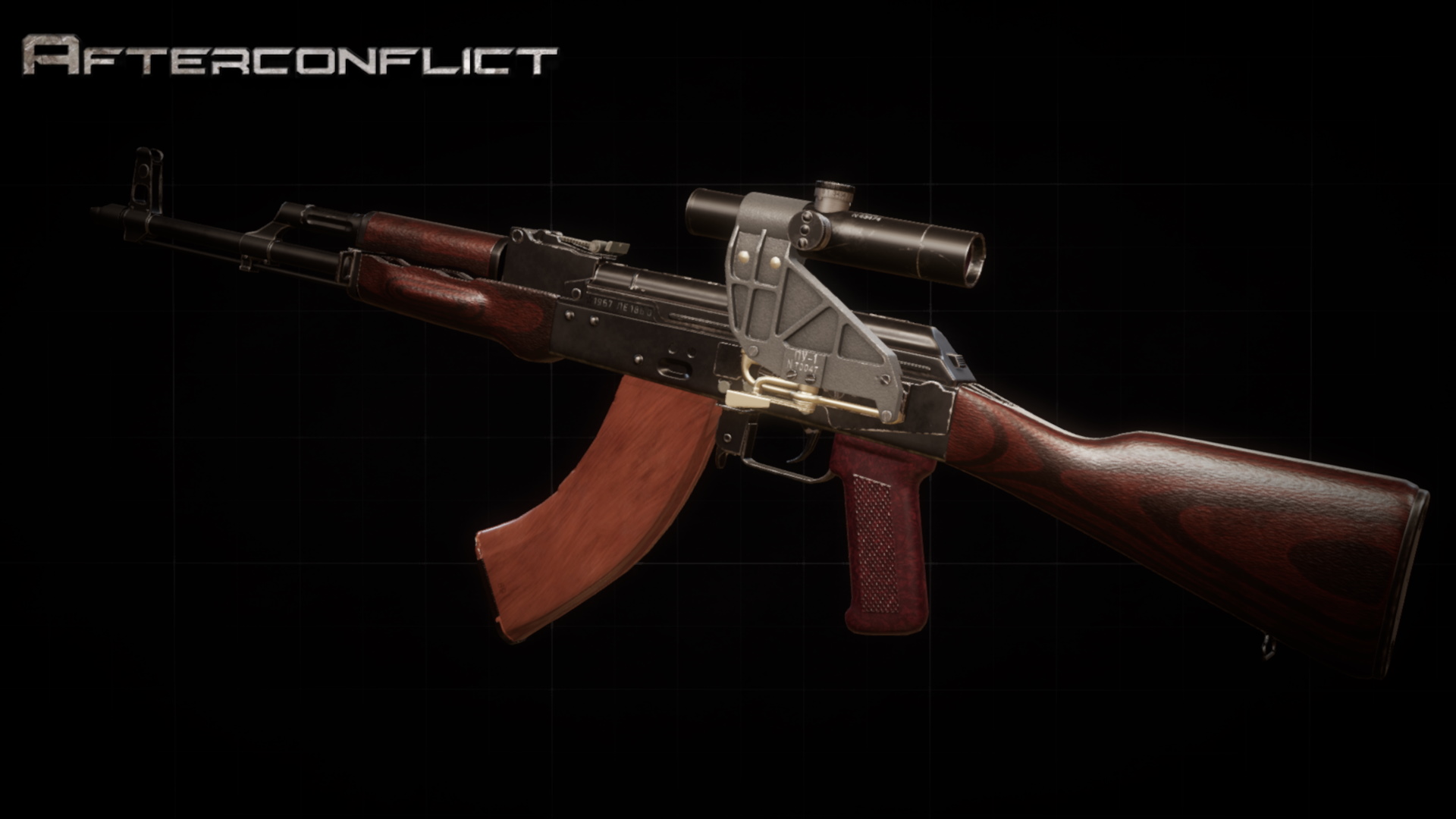 The AKML in particular was designed around the use of night vision devices, with a sturdy factory-fitted rail updated from some of the prior AKMN models and a flash hider that reduces interference with said night optics.
In Afterconflict rather than just being a cosmetic choice flash hiders will behave correctly to how they do in real life, making them a vital asset to the more subtle player who may not want the power reduction sub-sonic ammunition fired through a suppressor brings- especially at night. 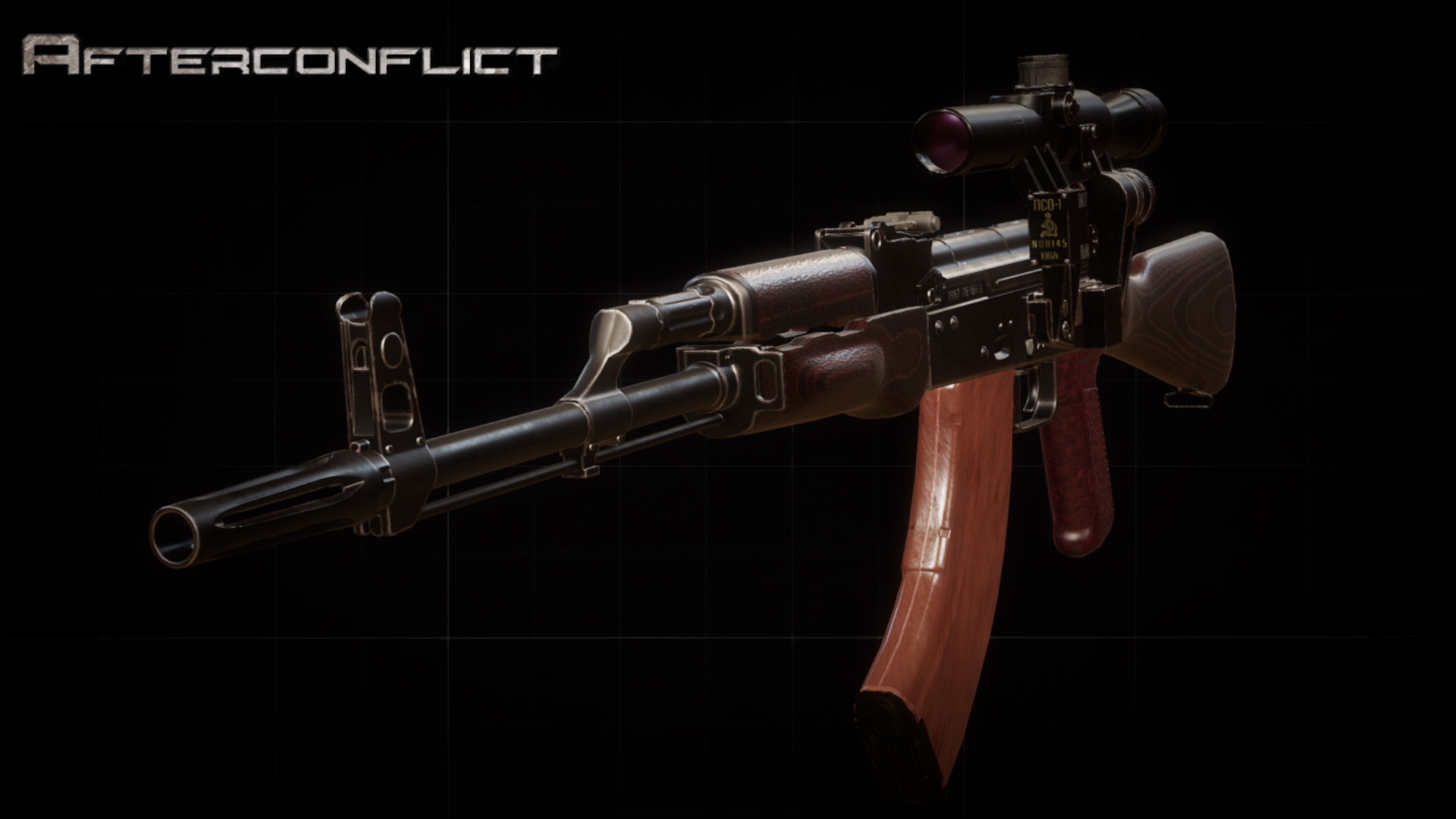 The previously mentioned PU-1 scope was "created", or perhaps more accurately, recycled near the end of the Soviet-Afghan war in the late 80s to combat the dire shortage of rifle optics needed to effectively combat the Mujahideen over the vast valleys of Afghanistan. 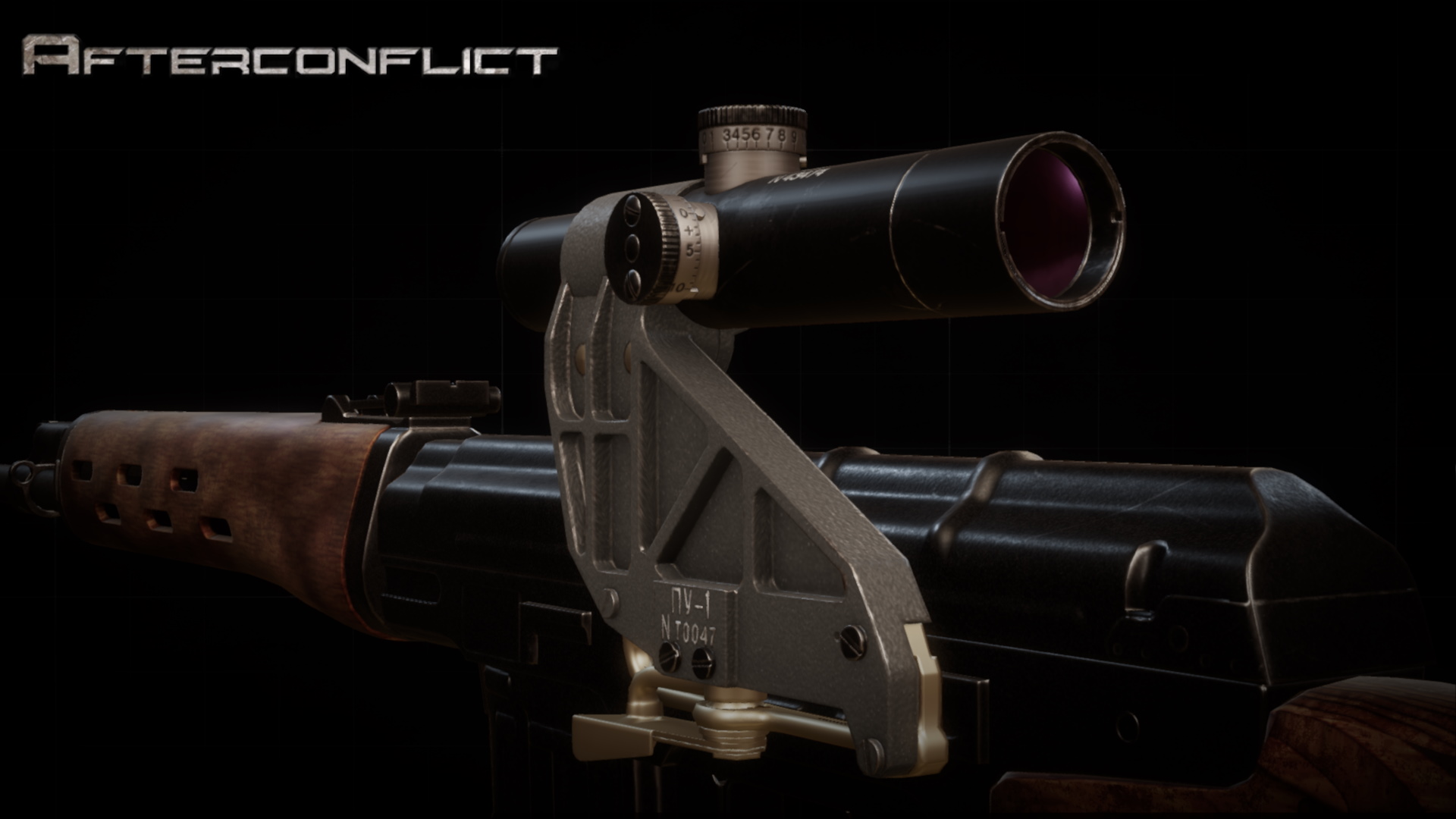 PU scopes deemed to still be fit for use were taken out of arsenal, fitted to a new mount that could be placed on any standard Soviet rail, and named the PU-1, which then due to the simplicity of the PU scope could be accurately zeroed for virtually any rifle from the AK-74 to the SVD.
As in real life, in-game the PU-1 serves as a simplistic, economical alternative to more sophisticated scopes such as the PSO-1 or 1P29. 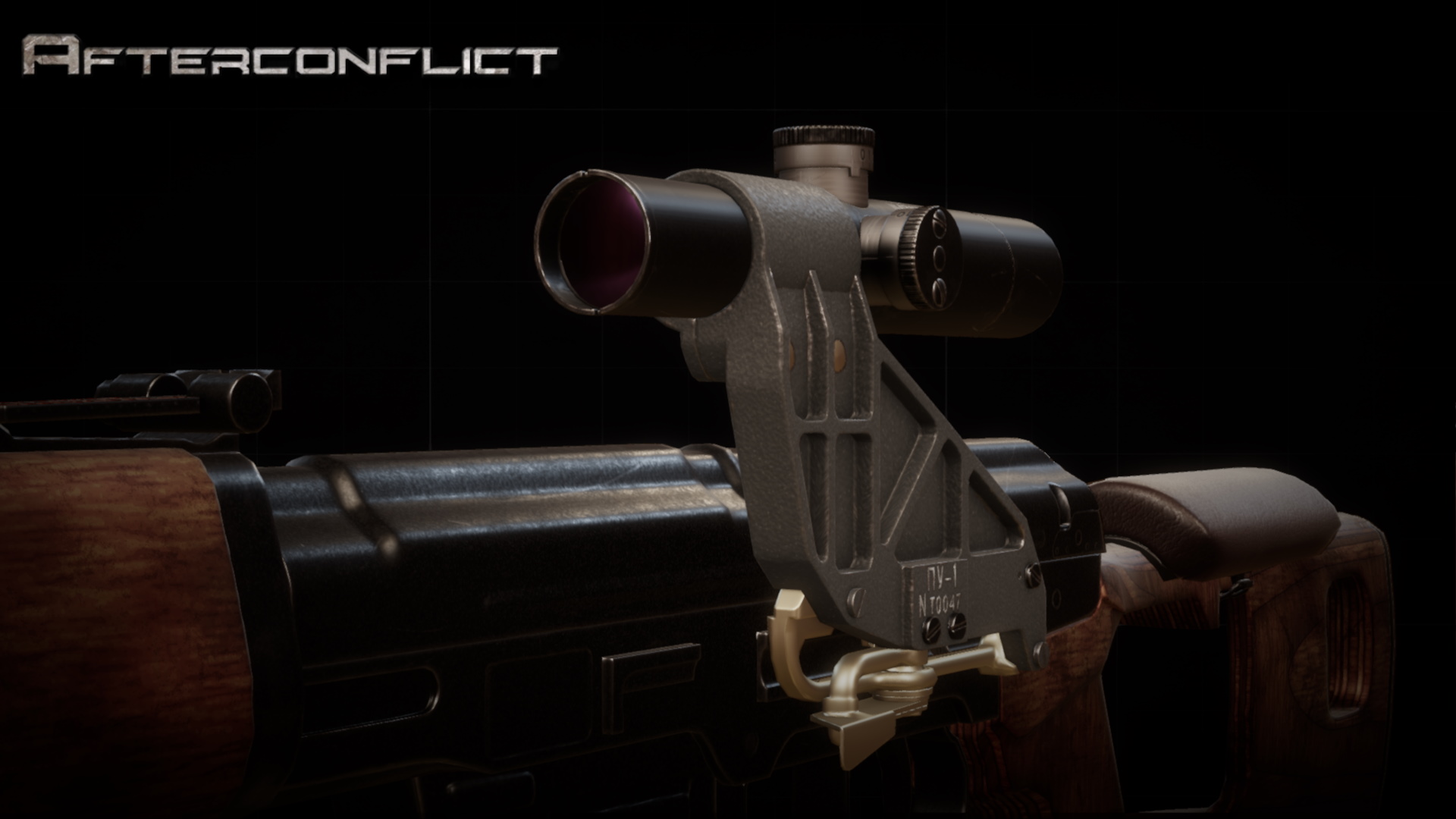 In addition to the Soviet AKM, we now have the DDR's domestically produced MPi-KM for use while playing as the NVA in Afterconflict.
While the DDR's more streamlined approach to the adoption of new weaponry meant that there weren't as many overt variants of the MPi-KM to choose from as the AKM, there was a notable production change at the start of the 1980s that saw the original wooden lower handguard being replaced by a bakelite one, a cosmetic choice you'll be able to make in-game. 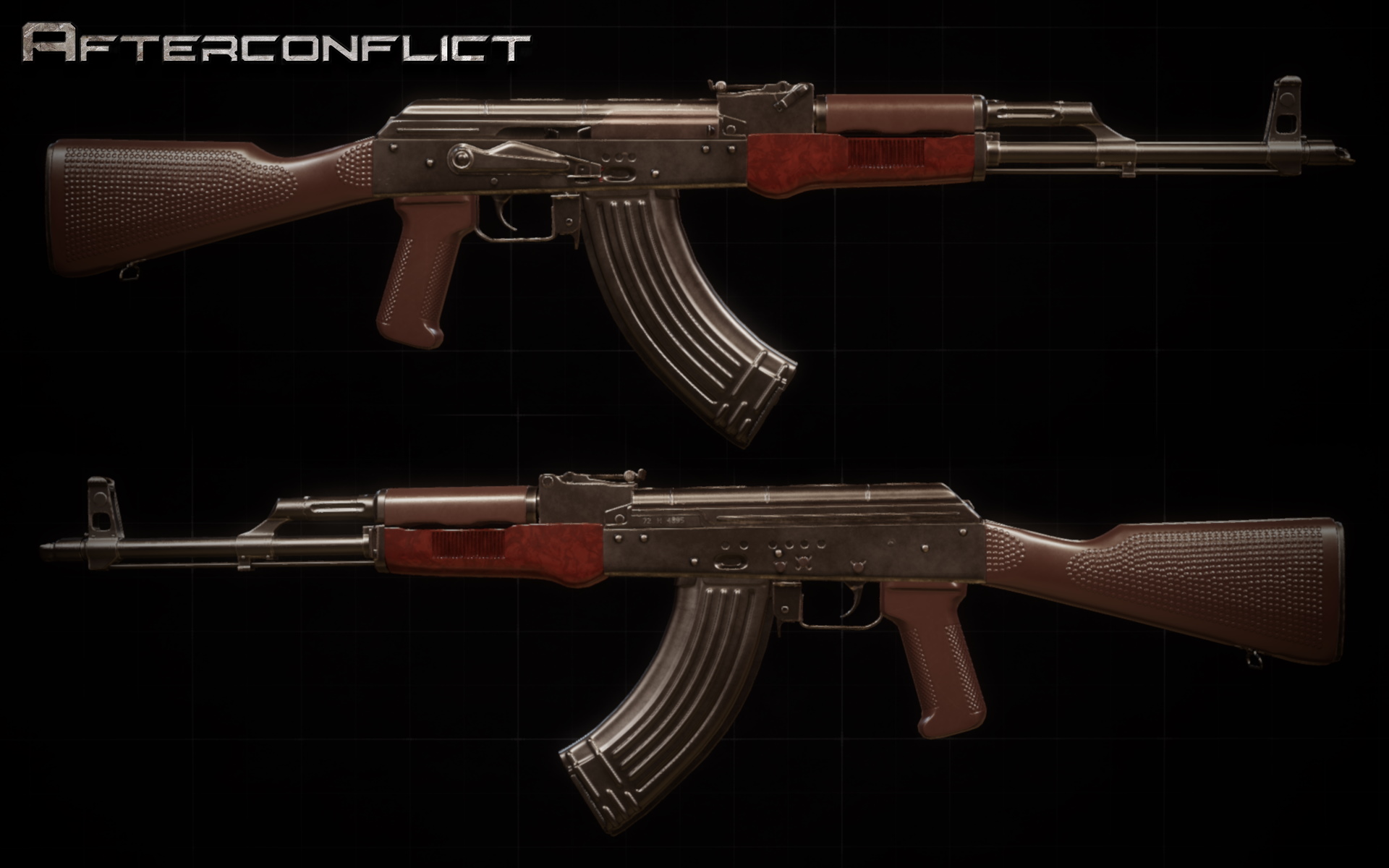 In our next update we'll be showing off a LOT more DDR content including both weaponry like the Pistole-M and gear such as the M56/76 stahlhelm, so stay tuned! Another feature you'll be seeing more of soon is our implementation of smoke grenades, and to complement that here we have the model for the famous RDG-2B smoke grenade, which will be accompanied by the RDG-2Ch too. 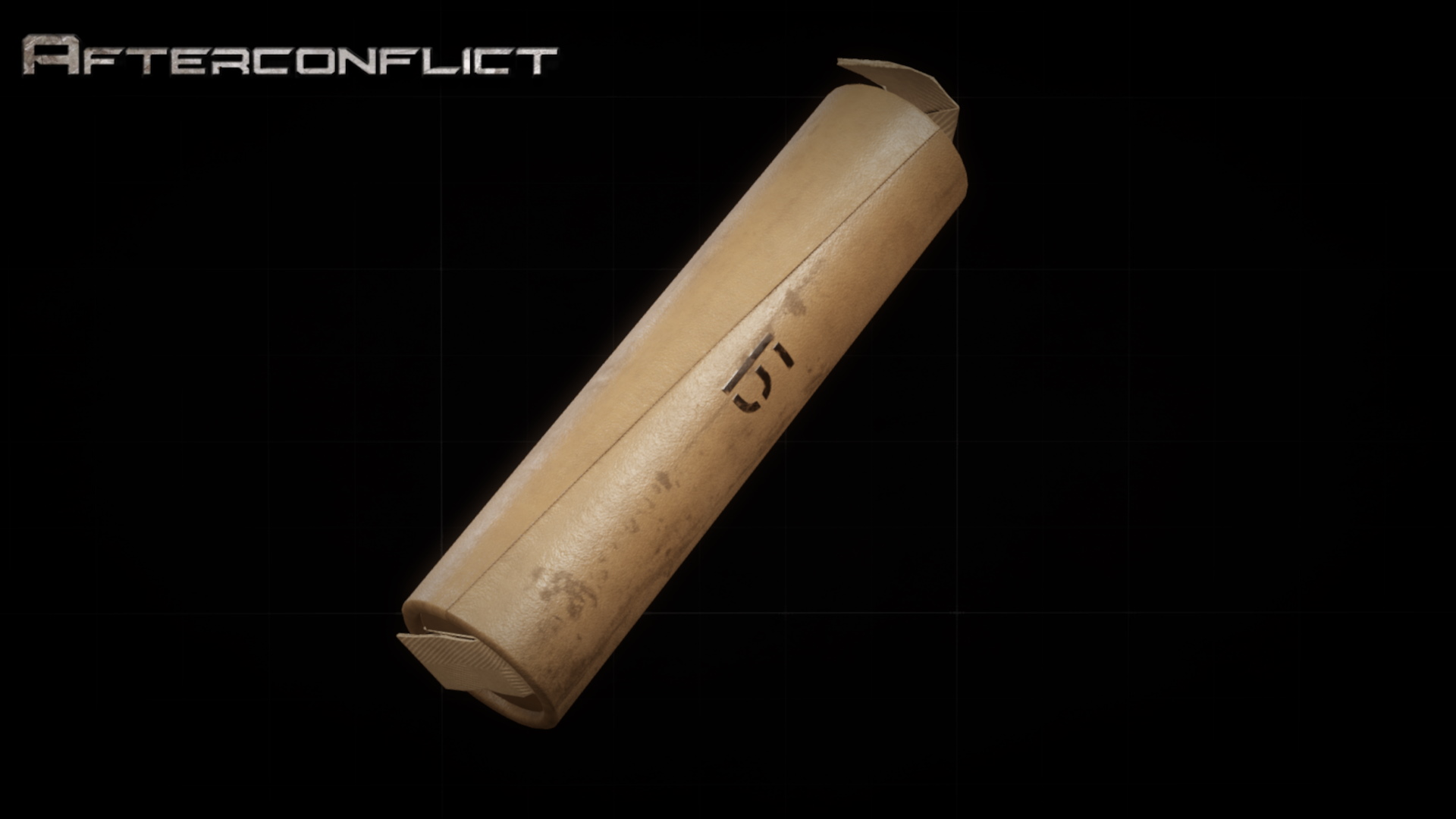 If you're quickly burning through magazines on full-auto you may notice your accuracy declining, this is due to the fact that our game also simulates barrel temperature, which realistically rises the more rounds you put through your gun in quick succession- so keep this in mind if you want to keep your shots precise. In the interest of making your shots precise you may also choose a rifle with a rail to attach a scope, but in situations where your attention is drawn much closer than your scope's focus permits, you're now able to switch between the use of optics and ironsights on rifles that permit it, such as the previously mentioned AKML with a PU-1 as seen here! 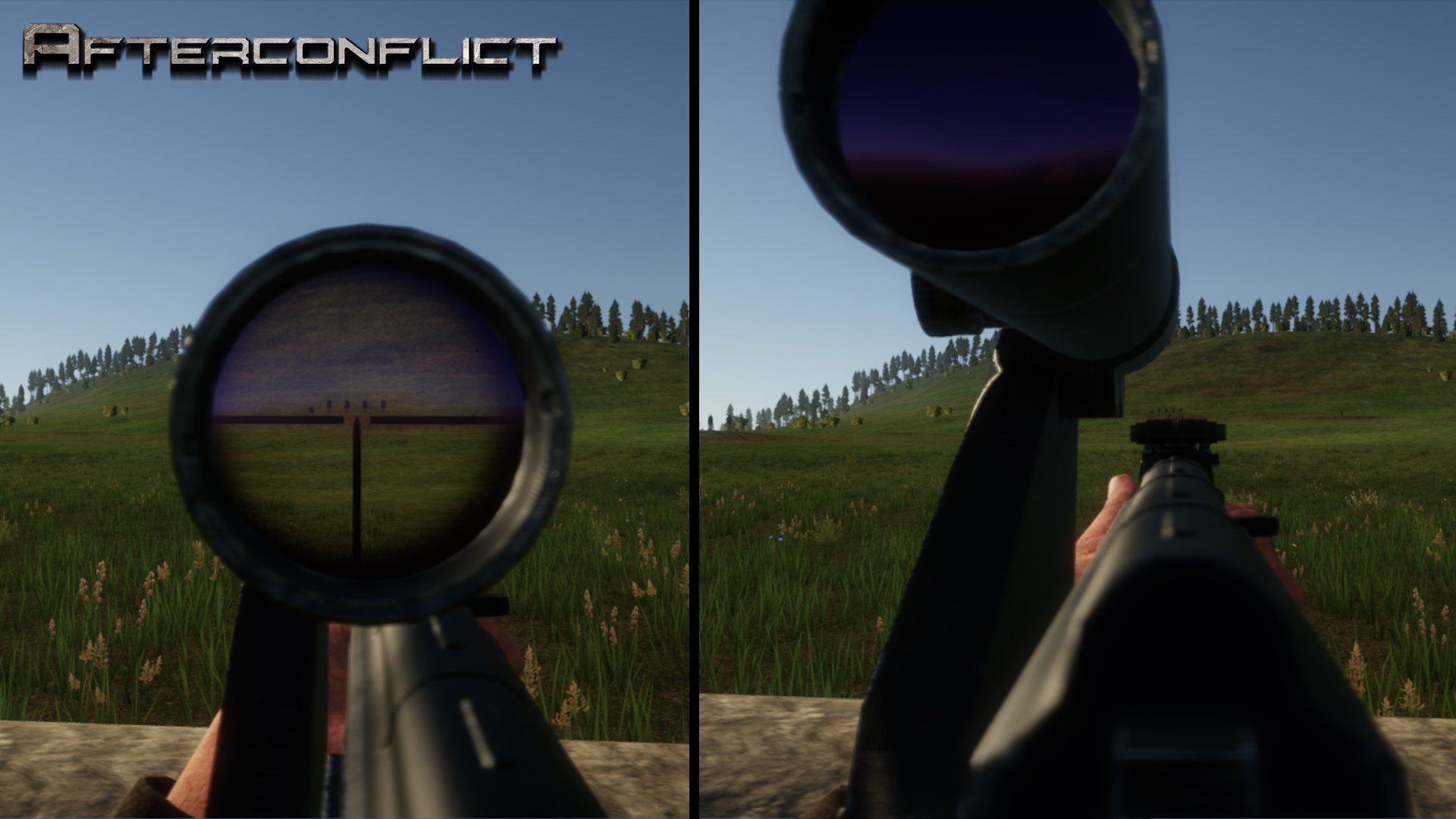 And finally, one of our most notable recent gameplay additions is the ability to blindfire around cover, which gives the player an improved capacity to suppress the enemy and defend a well-fortified position without making yourself an obvious target. 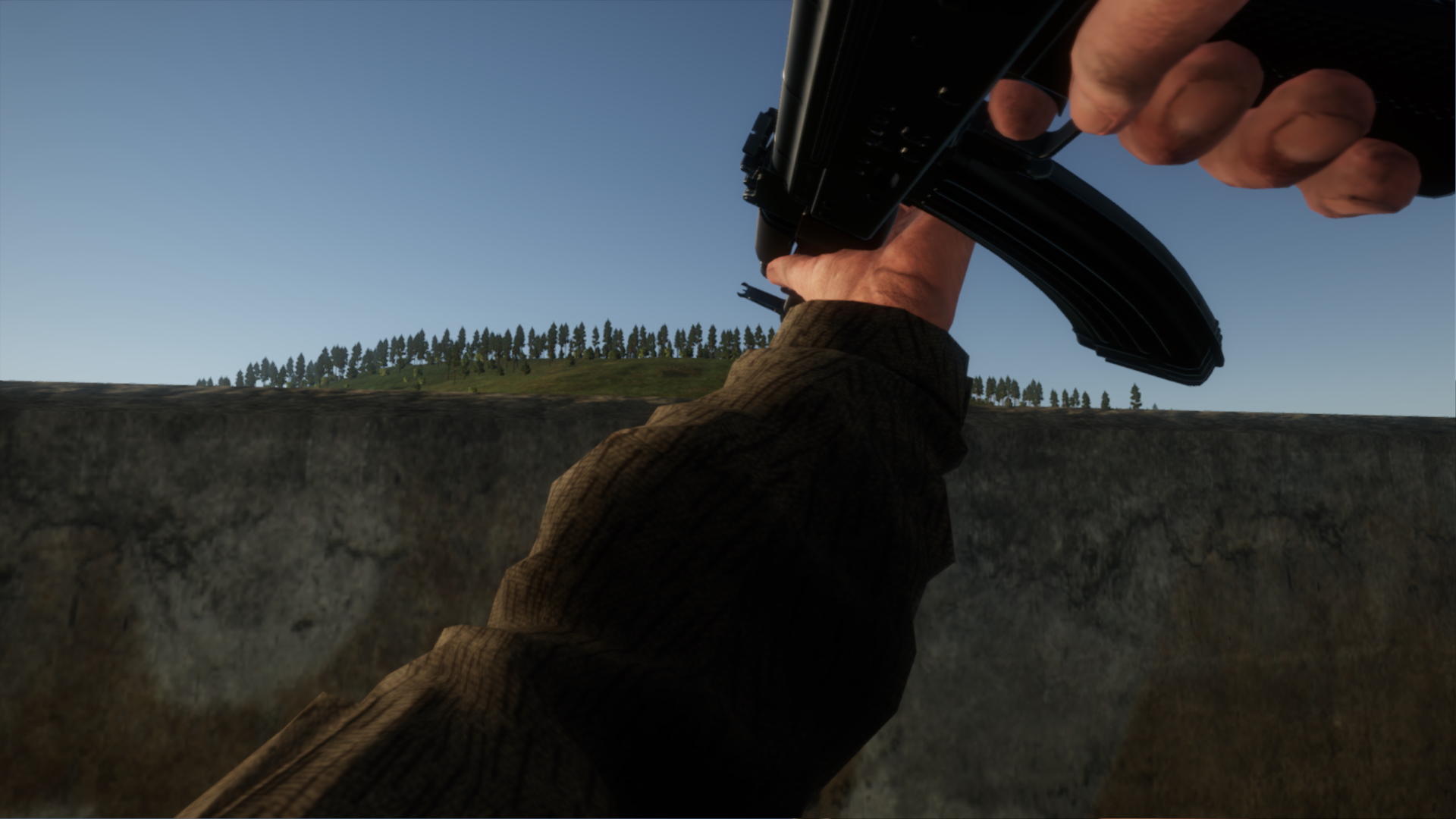 The Afterconflict Discord server is the best place to send your suggestions and we'd love to have you as part of our community, we discuss all sorts of things from general gaming to sharing different pieces of history from the cold war.